Cut Through The Noise - COL_UK

Check out this SlideShare Presentation:
Cut Through The Noise - COL_UK
View more presentations from roger1080.
Posted by Unknown at 08:55 No comments:

7 Ways to Deal with Difficult People

Dealing with difficult people is about staying in control of yourself, of the situation and the conversation. Sometimes you have to brave it out. This doesn’t mean fighting back but it may mean waiting until they have vent their spleen. Here are a few ideas on how you can deal with difficult people.

Listen – people like to talk about themselves so let them have their say. By listening you are creating an opportunity for that person to release pent up feelings. The trick is to know when to say stop, now I have listened and it is time to move on.

Build empathy – empathy is about being able to respect each others different points of view. You have opened up the communications channels. You do not have to sympathise with someone to build understanding about someone else’s position.

Build rapport – by listening you have started the process. It enables you to find the points of connection and build on those to create a good working relationship.

Be patient – difficult people are not always the loud ones. Sometimes quiet people can be just as difficult to deal with. They may come across as shy, sullen, uncommunicative etc. Give them the opportunity to overcome their reluctance to communicate in a non-threatening environment.

Stay in adult – if someone is acting in a childish way, don’t react by becoming childish as well. Stay in adult mode and wait for them to catch you up. Remember how frustrating toddlers are to deal with. Give them some space to work things out for themselves.

Bring them back to the point – the difficulty may be someone who likes to talk too much. Each time they go off the subject bring them gently but firmly back to the matter in hand.

Watch your language – you can’t always understand someone else’s feeling, but you can accept that they have the right to have them. Avoid “I understand how you feel…” and substitute “I understand that you are feeling…” Always comment on the behaviour not the person.
Posted by Unknown at 07:20 No comments:

Give Yourself a New Job Title

Imagine you had a new job title. Not any old title but one that would make a difference - to you and your team. Take for example Director of Making a Difference. What is the difference that you would make? It could be a different way of getting things done, or it might be making the difference to your customers.

What about Head of Momentum? Where might you find momentum in your organisation? How would you go about creating it?

Here are a few more different job tiles you could use:

Changing the name of your job may change the way you view it and where you place the emphasis - so go on give your job a new name!

Leading teams can be fraught with difficulties. Here are just a few of the most common ones.

Believing your whole team understands and accepts the team goals.

Issue: When did you last check that your team understood the overall team objectives and their role within that? Teams are made up of individuals and unless all the individuals are on board with the basic messages then there will always be forces pulling the team in different directions.

Next step: Set up meetings with individuals, groups, whole teams and ask them what they believe their goals to be.

Believing team name does not make a difference.

Issue: Your name is part of your identity. So it is with teams. Call a team Complaints Dept and they will. Teams need to be branded in a way that they find acceptable and ideally presents a positive image to the people they have to deal with outside the team.

Next step: Conduct a team branding exercise. Ask about perceptions of the team as it stands and what needs to be change. Make the team and brand an aspirational place to work.

Issue: Ever heard of Chinese whispers? Everyone puts their own interpretation on instructions and if training is conducted by someone different each time, then the messages on how to do jobs well is likely to get diluted. Training someone to do their job well needs to be done by someone who understands the job objectives and the purpose of the team. Not paying attention to the messages that people are receiving in the early days in the job means that bad practice gets spread around and become entrenched.

Next step: Always be involved in some aspects of the training and make training part of someone’s job description.

Teams need to be controlled

Issue: High performing teams have a clear sense of direction, but they do not need to be controlled. There needs to be to be regular check points but not to the extent that they get in the way of the teams’ performance.

Next step: Set fair performance targets for the team with a way of measuring and rewarding tasks that get done well.

Teams that appear alright on the surface are OK.

Issue: All good leaders should be aware of any underlying problems in their teams and look for ways to tackle them before they become a major issue. Ignoring problems very often means that they will just fester under the surface and inhibit a teams progress.

Next step: Build trust with your team, one at a time if necessary. Teams don’t necessarily have to like each other, but they do need to respect each other. Make sure respect is one of your teams’ values.

The leader knows better than the team.

Issue: Great team leaders know when to listen to their team. Team members are doing the job day in and day out and their opinions are vital to the success of the teams’ objectives. As team leader you need to take on board members views and where appropriate act on them.

Next step: Set up a listening post – some form of process for allowing your team to past back vital bits of information about the operation, project, product, customers – whatever - so that you can act on it.
Posted by Unknown at 08:42 No comments: 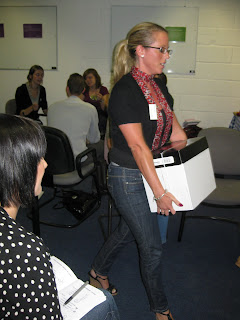 Manual Handling comes under one of those categories where everyone goes "why do I need to know about that!" that is unless they already have a bad back, or have damaged themselves by carrying heavy objects, awkward parcels or recently had an office clear out! 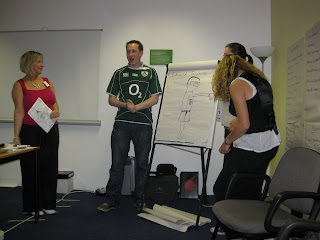 So when we set out to train a group recently, we made sure that not only did they learn some valuable skills which will help them look after their spines and other bits of their skeleton and bodies, but that they also had fun in the process! 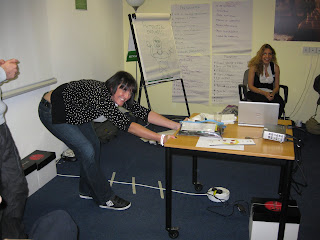 So next time you are thinking of moving something heavy or awkward, stop and think:
Stay safe and look after yourself!


Find out more in the book Changing the Culture of Manual Handling
Posted by Unknown at 09:10 No comments: 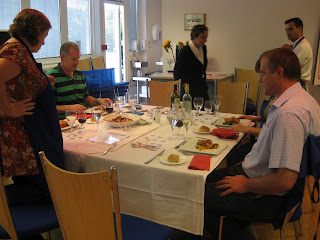 Just had a great couple of days with a team who chose to create a five course menu and follow it the next day with a drumming session. Great fun had by all.
Not only that they felt that they had got to know each other better and had re-energised as a team. 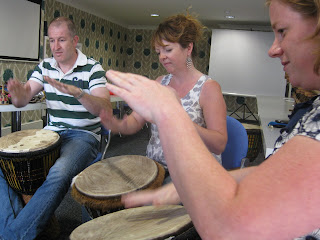 Which hat are you wearing?

With all the doom and gloom that has been around, you could be forgiven for wearing your black hat. This looks at all the negatives and what else can go wrong. For many, they seem to be wearing a red hat for anger. Anger with Fat Cats and anger with the politicians. A White hat may keep you aloof and concentrating on the facts and figures, whereas with a Green hat your imagination could run wild. A Blue hat would allow you to summarise everything and tkae a longer term view. Personally I prefer the idea of a Yellow hat. Let's keep things as sunny as possible and find some positives out there!

I used the "Six Thinking Hats" - Edward de Bono
Posted by Unknown at 07:53 No comments: 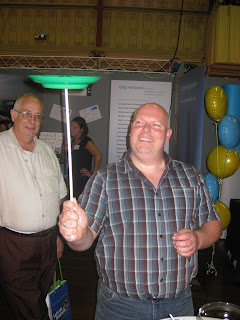 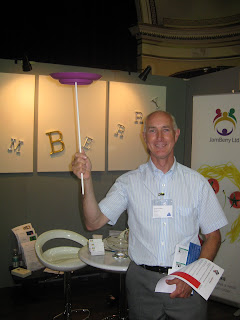 Images of customers spinning plates on the JamBerry stand at Let's Do Business last week. All the talk there was about re-energising people and teams for the future.


The lukewarmness arises partly from fear of their adversaries which have the law and tradition in their favour and partly from the incredibility of mankind who do not truly believe in anything new until they have had actual experience of it."

With a reshuffle in the air, what shoud Gordon Brown remember about change management?


1. Establish a sense of urgency - there's nothing worst than change that drags on, leaving everyone frutated in its wake.
2. Develop a vision and strategy - make sure you are clear on where you want to get to and when
3. Communicate the change vision - don't forget to tell everyone where the organisation is now headed for and why
4. Introduce new customs and practices - make change visible so that it doesn't just become bsuiness as usual
5. Empower a broad base of people to take action - action makes change happen, without it you are lost
6. Generate short term wins - and celebrate them appropriately
7. Consolidate, consolidate, consolidate

Good luck Gordon!
Posted by Unknown at 09:37 No comments:

The Keys to Success

Found this great little video for all those entreprenuers out there


We all need a hero from time to time - but we can also make people into heros - here's how!


1. Whether they are officially rewarded or not, say thank you to employees who have achieved their targets.
2. Thank people for their suggestions whether you use them or not. Thank them for their concern.
3. Take your boss to lunch in appreciation for their help on a project or piece of work.
4. Keep an innovation book for good ideas and recognise those that get adopted.
5. Create symbol’s of a teams work or efforts (T-shirts or coffee mugs with motto or logo)
6. Reward those who are not normally in the limelight for doing their job well.
7. Support staff in their continuing professional development. Encourage them to learn.
8. When discussing an idea with your boss that has come from an employee, make sure they get the recognition.
9. Create group level awards to recognise teamwork.
10. Provide a donation in the name of an employee to a charity of their choice
11. Create an ongoing recognition award named after a particularly outstanding employee.
12. Create a company Oscar ceremony to recognise outstanding performance.

Make heros in your team to inspire and motivate.
Posted by Unknown at 10:53 No comments:

We have a number of books available on Kindle:

Create a New You

Changing the Culture of Manual Handling